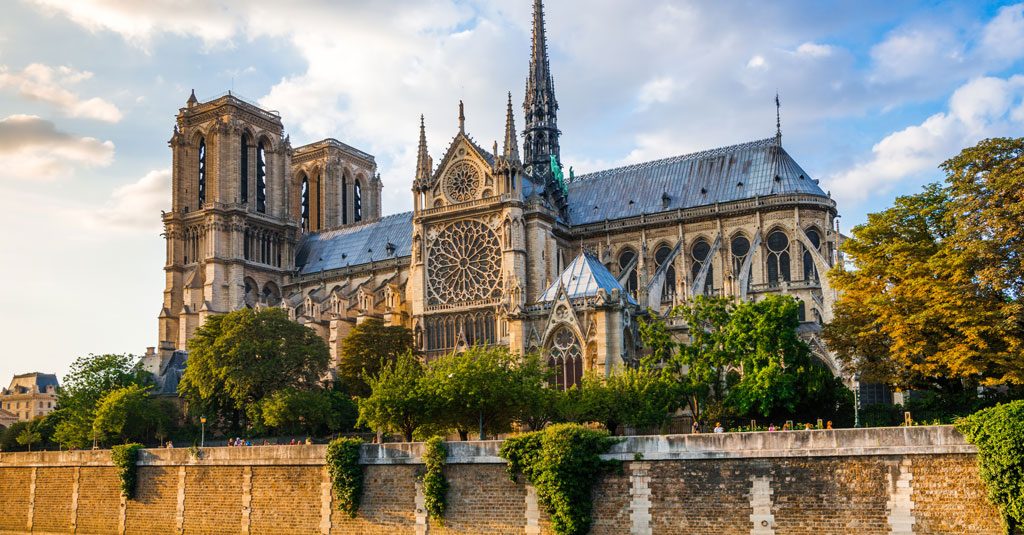 Notre-Dame de Paris is one of France’s most celebrated monuments. Built in the Middle Ages on the ruins of two even older churches, the foundation stone for the Cathedral was laid in 1163 by Pope Alexander III. Over the next century, construction continued as the choir, nave and other critical features were completed. Work was finally completed in the 15th century, but time takes a toll. After the Cathedral was damaged during the French Revolution, architect Viollet-le-Duc restored it to its former glory in a 19th century Notre Dame Cathedral reconstruction. However, time continued to take its toll, and on April 15, 2019, the unthinkable happened: Notre Dame Cathedral caught fire.

As people around the world watched in horror, the latticework wood roof and iconic spire on the 850-year-old historic landmark collapsed into ashes. While the loss was incalculable, historians breathed a sigh of relief. It could have been much worse: Much of the great Cathedral was preserved by the fast action, quick thinking and hard work of many dedicated firefighters.

Once the smoke cleared and the damage was evaluated, it was time to get to work repairing the damage. President Macron promised to rebuild, and the prime minister announced a Notre Dame Cathedral redesign competition, which inspired visions from architects from around the world. Although the Cathedral has a reputation as an icon of Gothic architecture, it has undergone periodic restorations and updates, particularly during the 18th and 19th centuries.

World-renowned architects such as Foster + Partners and Studio NAB as well as many others have already offered a variety of ideas ranging from modernistic lighted glass structures to more conventional looks for what has been called the “world’s most significant reconstruction project.” The goal for the Notre Dame Cathedral reconstruction isn’t necessarily to recreate the original look of the Cathedral but to develop something completely new, which enables designers to bring exciting new elements in while preserving the storied past and vital aesthetic elements of the building.

Architect Norman Foster, whose proposal featured stainless steel and crystal, explains that updates and repairs to the Cathedral have traditionally involved the most advanced architectural technology: “In Chartres, the 12th-century timbers were replaced in the 19th century by a new structure of cast iron and copper.” Other architects have offered Notre Dame Cathedral rebuilt design entries that have included spires that pay homage to the Cathedral’s regal Gothic architecture, jewel-toned stained glass, minimalist elegance and even one designed to transform the rooftop into a sleek, modern greenhouse with educational workshops and spaces.

Along with preserving the aesthetics of the landmark structure during the Notre Dame Cathedral redesign, builders will be focusing on making critical updates as far as maintenance, repairs and the installation of various safety features. Experts may even be turning to some fairly surprising sources to get the job done, including Ubisoft, the video game manufacturer, which has offered its expertise, and the late Vassar College historian, Andrew Tallon, who created a detailed 3D laser map of Notre Dame. With the rebuilding and restoration efforts, new life will be breathed into this magnificent Cathedral for many generations to come.

Architecture is one of many ways people have to leave their mark on the world around them. With architecture, we blend art, science, engineering and technology to create an environment in which we can both live and thrive. At Jacaranda, we use the most advanced technologies to create wood products for environments that are beautiful, welcome and lasting. We use only real wood to craft our veneers, which are Class A fire rated, and environmentally friendly practices to ensure a plentiful supply for future generations. Contact us today to learn more or to schedule a consultation with a member of our design team.